One of the most versatile cross-arts collaborators in poetry today, working with artists, musicians, dancers, film makers and puppeteers, as well as other writers. Philip sees collaboration not as the opposite of the individual creative voice but as a way to find and deepen it.

With Lesley Saunders — A Part of the Main 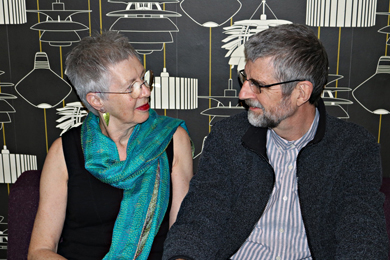 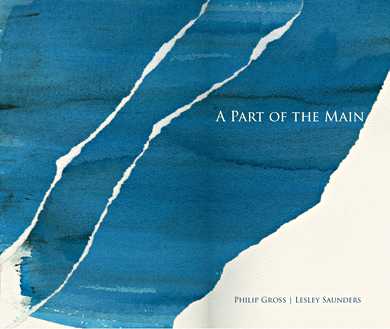 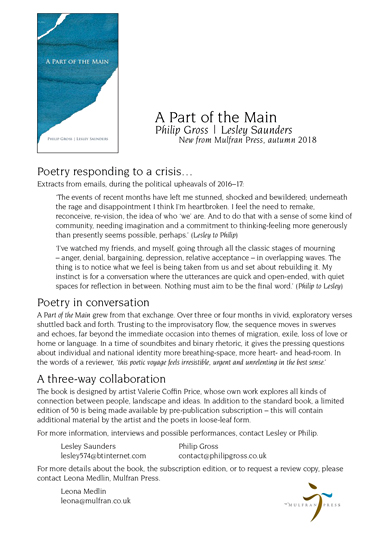 Click on the flyer, left, to enlarge in a new window

It was hard to know how poetry could play a part in times of anger and loud discord, when anything less than shouting seemed too quiet to be heard. In readings from our collaboration, A Part of the Main, Lesley Saunders and I have tried to offer deep perspective for questions about individual and national identity, themes of migration, loss of love or home or language, and a kind of listening that goes beyond the either/or.

Our thanks to our publisher, Mulfran Press, and to kind hosts and thoughtful audiences in Cardiff, London, Oxford, Reading, Shrewsbury, Tunbridge Wells, Bath, Bradford on Avon and others to come.

‘With its plea for unityâ¦ for emotional and linguistic empathyâ¦ for the recognition of a âmotherlineâ that speaks of us all originating from the same source, A Part of the Main, resolutely alive with flint-sparking metaphor, and not least by its claim âthat our birthright was not to be great but be kindâ, is a clarion voice in a din of obfuscation’, writes Ellen Bell in Poetry Wales. 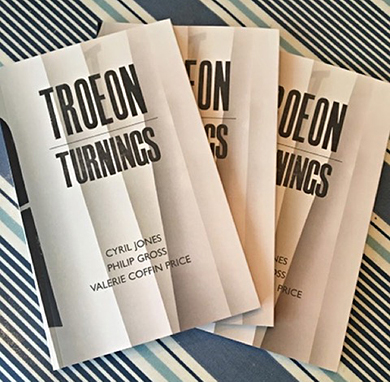 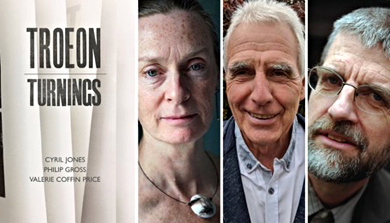 To turn, to dig, to plough, to upset, to translateâ¦ Bend, lap, journey, time... The Welsh word troeon unfolds meaning after meaning. In TROEON : TURNINGS, two poets confident in their own traditions meet in the hinterland between translation and collaboration — Cyril Jones from the disciplines of Welsh cynghanedd, Philip Gross from the restless variety of English verse.

Rather than lamenting the impossibility of reproducing any languageâs unique knots of form and content in translation, they trust each other to explore the energies released.

In the same spirit, Valerie Coffin Price plays an equal part with striking letterpress designs that surprise the language of both writers into new awareness of its possibilities.

With Valerie Coffin Price — A Fold in the River with exhibitions, talks 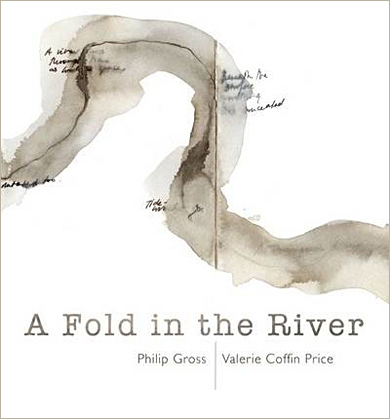 Coming to South Wales, TS Eliot-Prize winning poet Philip Gross lived on the banks of the River Taff near Quakers Yard. Here, his poems and journals from that encounter meet the visual responses of artist Valerie Coffin Price grounded, through walking, in an immediate engagement with place. Together they in-fold past and present landscapes, in a subtle creative conversation with each other's art and ways of seeing, as well as with the river itself. The result is A Fold in the River, a stunning collection of poetry and original artwork.

For festival performances: Philip Gross reads from the poems, and then opens out a discussion with Valerie Price about the different ways of seeing artists and writers bring to the world. Valerie brings insights from her career as a walking artist, immersed in nature. They can bring a powerpoint presentation of the book's images, subject to facilities, and can also provide an exhibition of the artwork if space permits.

‘Unsurprisingly, the book, is, in itself, a compelling aesthetic object, both in feel and presentation. Price's art work and Gross's poems are combined in riverine and arresting ways that immediately hook the reader. You travel the Taff with both artist and poet, as they bear witness to its many manifestations and the residue of its history. Gross makes an engaging guide in a series of poems that flow from surface to depths and back, linking the origins of the river, its industrial past and its elemental properties. His tone typically intimate, conversational, balancing a philosopher's finesse with wit and precise observation that always delivers its ancient topic in a memorably fresh light. Price's graphics create a sense of linear propulsion, as if you are in a boat, passing through one experience of the river to the next in a shifting equation of light, mood, memory, and cultural trace.’ Review from Wales Arts Review, click to read the whole article. 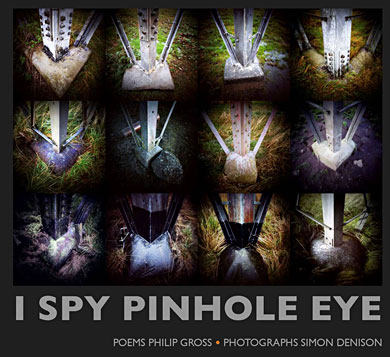 This collaborative work of poems and photographs addresses ideas of perception, revelation and truth. The camera sees differently from the human eye, yet suggests what might be perceived if we could only see more deeply, more imaginatively, than we normally do. Simon Denison uses a pinhole camera to photograph the most mundane of objects — the footings of electricity pylons — and so transfigures them into dark poetic images that release worlds of association. Philip Gross's poems step back inside the eye of the pinhole camera to explore the act of seeing and interpretation, in work that is meditative, playful and profound.

‘What Denison presents — the dark rootings of steel and concrete; the feeling of something slamming into the earth, establishing its narrow vocabulary of grass, stone, mould, leaf, strut, and the strange, focused moony chill that freezes everything — moves through the clarity, steadiness and humaneness of Philip Gross's verbal imagination to create something new. And that, after all, is the idea: the making new, the exploration, or apprehension of the way things are too much and terrible ... there always being something else under and beyond the changing names of things.’ From the Preface by George Szirtes

With John Eaves, F.J.Kennedy — A Cast of Stones 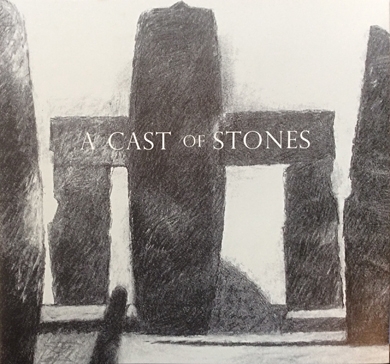 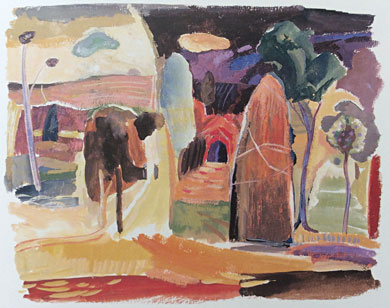 Beautifully illustrated, this book is a collaboration with two fine and very different artists. Questions and suggestions weave round the mysteries of Avebury and Stonehenge.

‘...a contemporary response to the power of two famous ancient circles. John Eaves' brooding pictures of Stonehenge draw poet Philip Gross into a game of shadows, at once playful and perceptive. A medieval tragedy is the narrative thread for Gross' exploration of Avebury, treading a line between past and present, fact and fiction, irony and celebration, loss and love: a sensual vision mirrored in F.J.Kennedy's lively paintings...’ Mike Pitts, author of Hengeworld

Jeremy Tankard, typography — Caves of Making [poetry and prose essay (Newmarket: Professional & Higher, 2013) 9781907076749
‘Caves of Making offers the textual equivalent of a creative festival, bringing together the work of three remarkable creatives. Philip Gross provides a poem, “Cave diver in the deep reach”, and an extended commentary on how the poem was written. These are followed by contributions from typographer Jeremy Tankard, whose unique “Redisturbed” typeface is used throughout the book, and artist Rika Newcombe.’

With Peter Reddick — The Abstract Garden 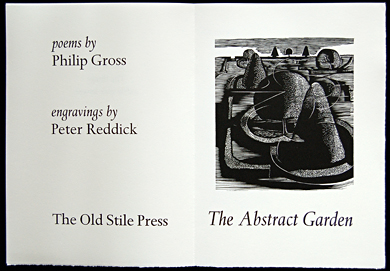 A beautiful hand-crafted limited edition of a specially commissioned collaboration between Philip and a highly respected engraver, the late Peter Reddick, with creative design by Nicolas McDowall of the Old Stile Press.

The Air Mines of Mistila, with Sylvia Kantaris —
A Poetry Book Society Choice 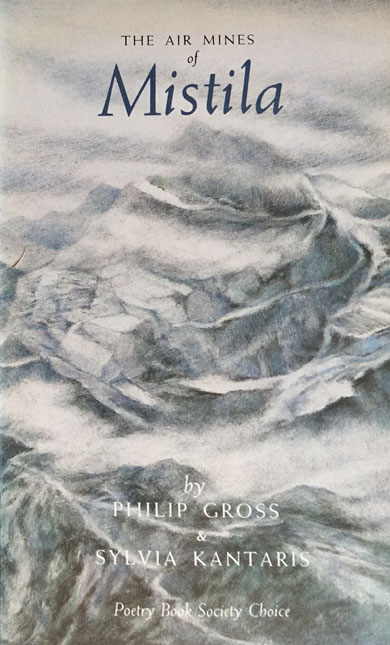 A whirlwind collaboration with poet Sylvia Kantaris produced this haunting and surreal verse fable. It is full of wry lights on the real world and real relationships. With illustrations by Kim Lewis.

The King in the Car Park: cantata with music by Benjamin Frank Vaughan for children's choirs from Leicester and Leicestershire schools, part of the Leicester Cathedral's schools' singing programme DioSing! in collaboration with the Richard lll Project. Premiere: 30.06.2015, Leicester Cathedral

“The King in the Car Park comprises nine movements in a variety of musical styles as diverse as jazz, musical theatre and folk. Telling the story of Richard III's life, death in battle and recent rediscovery, culminating in the finale ‘Coming Home’. The music has been written by up-and-coming Welsh composer Benjamin Vaughan who studied composition at the Royal Welsh College of Music and Drama and the libretto by poet and Creative Writing professor Philip Gross. The piece was performed for the first time by 300 primary school children from schools across Leicester and Leicestershire who worked with DioSing! Choral Directors during the academic year alongside Leicester Cathedral choristers, Loughborough Children's Choir, a counter tenor soloist, and a live band including piano, flute, clarinet, double bass, a variety of medieval instruments and the Leicester Cathedral organ.”

Our Home Addresses: commissioned text set by Benjamin Frank Vaughan for the inauguration of Rowan Williams as Chancellor of the University of South Wales, 2014.

With Vanilla Allsorts — During the 1990s, Philip performed with the improvisatory jazz-based group with John Eaves, Ralf Dorrell and Miranda Bowri, culminating in the performance A Game Of Henge — published with paintings by John Eaves and F.J. Kennedy as A Cast Of Stones (Digging Deeper, 1996). 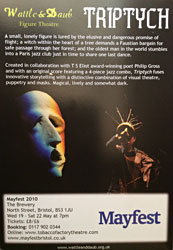