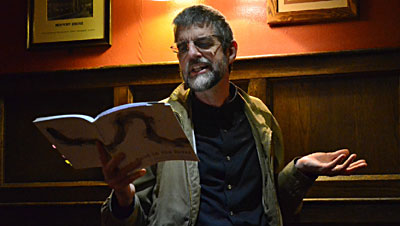 With thirty years of appearances at festivals and at venues large and small, in the UK and as far afield as Estonia, South Africa and Australia, Philip's readings create a feeling not so much of a performance as a conversation. Contact Philip to ask about his availability and fee.

Since the 1980s, Philip's creative workshops have been unlocking writing and imagination for people of all ages and at all academic levels, with techniques that cross the borders between art forms and between the arts and sciences.

As Professor of Creative Writing at the University of Glamorgan / South Wales (2004-17) Philip Gross had chance to reflect on thirty years' experience of writing, teaching writing and collaboration.