The eucalyptus ideogram (from Woodbrooke)

At the Voices of the Earth poetry-and-art workshop at Woodbrooke Quaker study centre last year, one thing led to another. First, finding/making some ephemeral art in the wooded gardens... One particular eucalyptus tree was offering shapes in its peeling bark. 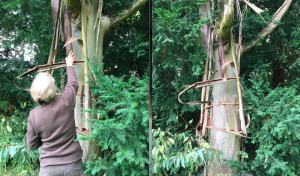 I don't know very much about Chinese ideograms, but we seemed to be looking at one, which we could refine to this: 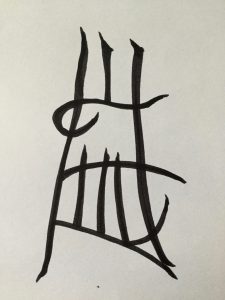 Now, imagine this as a character from an as-yet-undeciphered inscription. Or consider this as an I Ching kind of hexagram, waiting to be interpreted. There will always be different readings... which is of course the point. The group of us gathered together on the course gave one 'translation' each... 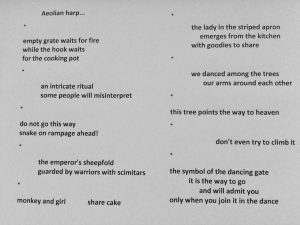 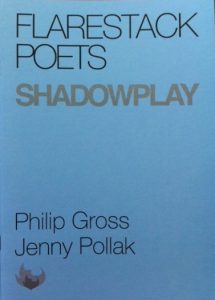 Introducing Shadowplay, a collaboration with Australian poet and artist Jenny Pollak, published in the handsome (and subtly varied) livery of Flarestack Poets.

Mark Tredinnick writes: 'Philip Gross is one of our poetic elders, and so he writes here - his stanzas taut and gentle, inventive and provocative koans, Jenny Pollak, a brilliant sculptor, is a lyric and plainspoken contemplative...'

And Jeremy Hooker: 'The exploratory work they create... makes a hospitable 'place' into which the reader enters, not as an eavesdropper, but almost as a third collaborator, sharing the surprise and delight of the conversation.'

[What truer tribute to a book than to want, as here with Italo Calvino's endlessly hospitable-unsettling Invisible Cities, to walk around it and to add a glimpse of your own?]

There's no end to the travellers who have set out in search of the city of Agnosia. No one has reached it, or if they have, they have never returned. There is a whole department at the university whose job is to prove that it cannot exist... which lends a certain frisson to the tale of Professor Z, who packed his books and took the homeward tram one evening to find that his garden gate, by some accident of streetlight, seemed to open inwards onto a vast square, with formal gardens of silvery-white bushes round an ornate fountain gushing jets of pure dark. It was just a moment, long enough for him to recognise Agnosia, and the choice: to step in, now or never, for once and for all. Which he did.

The Private Lives of Colours

.... sucking his favourite colour of pear drop till it was transparent, almost colourless ... holding the sticky brittle disc up to his eye, a monocle – seeing the world through it: a sweeter and sunnier place ...

... now, there's a guilty pleasure – creeping into his mother's room to filch her nail varnish – yes, that shade she never dared to wear – to paint his Matchbox Toy racing car .... a Maserati, he recalls...

... trying to Tippex out the red ink mark, the See Me - in his exercise book – the only one, but inexcusable – he dabbed and dabbed, until it turned to thick blancmange – but never, ever, blameless white ...

... the new tree, that the garden centre swore was it, blossomed at last… and was wrong – too fleshy-plush, a crude brash imitation of the one that had shadowed his childhood’s window, wrapping him up in its scent that was almost too much… until the day his father gave in to grandmother’s grumbles – it’s like a forest in here, she said – and chopped it down...

... the page he always turned to in his Observer’s Book of Butterflies – the one he never saw – half way to moth, as much Queen of the Night as Emperor – a colour shading to and glancing off the black as if the thing itself had fluttered close enough to feel, glanced off the moment, to its dark side, always almost or just gone...

... you couldn’t take the taste of me, unsweetened – or, having spilled me, ever get me out of your clothes – blunt my edge (please), mollify me with the custard, stir lashings of cream till I sit on your tongue with a sting that’s (only) half a pleasure, dressed like royalty: the king himself, or his velvet-clad Fool...

[The pleasure of this, of course, is writing your own. First that and then, if there are several of you, asking each other to guess. If you're like me, you will have colour-memories from way back, maybe before I had any words for them. Which is, incidentally, my riposte to the language-theorist's proposition that language, just language, is what creates our experience of the world.]

[... in response to a friend's slightly exasperated question at first sight of the sea: 'I know you're not meant to say 'sparkling', but it just is, isn't it? What else can you say?]

no, the sea isn't 'sparkling' –
it simply can't contain its excitement
at the rumours about light

Poetry School seminars are intimate workshops led by some of our best working poets. These groups have helped many writers around the UK become part of their local poetry communities and to develop their work through long-term guidance. In these seminars, a small group of participants meet on a monthly basis to workshop poems-in-progress, discuss contemporary poetry and develop new skills and confidence in their writing, all under the direction and guidance of a published tutor.

This  group will meet at The Courtyard in Hereford on (generally) the first Tuesday of the month, from October 2018 to May 2019. This will be a small and supportive group, with a maximum of 8 students, and will be led by the award-winning poet Philip Gross. Places for the year cost £240 full price, with concessions available for those over 60 or in receipt of state benefits.

This seminar is full and well under way, but it will run again from October 2018. Keep in touch with the Poetry School for details.

Breaking taboos for its own sake is adolescent, especially other people’s taboos. But there’s a grown up question in the game of Perverse, a magazine responding to a call from editor Chrissy Williams for “deliberate, obstinate, unreasonable or unacceptable poems” The question is: ‘What’s the particular decorum you would feel queasiest offending? What energies, for good or ill, would it release if I did?’ Then you can choose.

Issue 3 is just out,  including a small perversity of mine. Available by email subscription or by twitterfeed - https://twitter.com/perversemag

The National Literacy Trust asks Philip some questions about reading.

Just click here to see the questions and the answers:

The individual haiku started, after all, as the opening verse for a collaborative renga, so it's natural that the response to a fine haiku is to want to write yourself. A classic example from Buson -

butterfly
sleeping
on the temple bell

- prompted the poem Japan by Billy Collins (in which the butterfly, incidentally, becomes a moth):

Twelve people on the haiku course at Ty Newydd offered verse-responses, all quite different. I offered this -

the first quiver of its wings
will trigger the colossal clang

- to which somebody else said 'Chaos Theory!' So it goes.