Journeys with Haiku (with Lynne Rees and Philip Gross)

A 'weekend of calm alertness and serious creative play' at Ty Newydd Writing Centre, North Wales, 13 - 15 July  (tutors / Lynne Rees & Philip Gross) is already a good memory, with not just haiku but all kinds of testing of the edges of that form, with expansions and contractions, haibun prose, several lovely fluid rengas and a challenge to offend against as many of the conventions as we dared...

Tŷ Newydd is located in the village of Llanystumdwy, between the towns of Cricieth and Pwllheli on the southern coast of the Llŷn Peninsula. Reflective moment caught by Lynne Rees, of part of the group just where the river Dwyfor meets the sea: 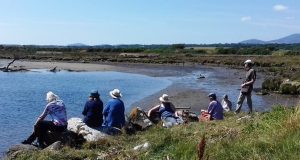 the width of the world
is measured by the oystercatchers’ wheep

its centre, always
shifting, by the plop of sea trout
coming up for flies

The National Literacy Trust asks Philip some questions about reading. →